Herriot Row is the new musical moniker of Auckland, New Zealand-based songwriter Simon Comber. Comber began writing songs after moving from Auckland to Dunedin in the early thousands to study composition and literature. By the end of his first year he’d won a composition prize for his efforts, awarded by Graeme Downes, music lecturer at Otago University and songwriter for iconic Dunedin band The Verlaines. Whilst back in Auckland for the summer, Comber was spotted performing by Split Enz founding member Mike Chunn and Crowded House frontman Neil Finn. They were impressed enough by his concise, articulate songs to suggest he record his debut album at Finn’s Roundhead Studios. After completing his first national tour in support of The Chills, Comber entered the studio with prodigious producer (and member of cult Flying Nun band Bressa Creeting Cake) Edmund  McWilliams to make the album Pre-Pill Love. “A powerful new singer-songwriter has arrived”, declared Jeff Harford for the Otago Daily Times, finding the album “rich with reflections on real-life watershed moments.” Songs like ‘Early Spring Rain’, ‘Sunday Horrors’ and ‘Marylands’ said what they had to say with quiet insight and shrewd economy. “Judee Sill’s weapons – a unique voice, intelligent writing, and some wonderful lyrics – are his,” wrote Roy Colbert for the Sunday Star Times. “Musically, he’s like a young Don McGlashan.”

Comber’s sophomore album Endearance (2009) offered up bold narrative dissections of complex relationship dynamics and psychic struggles, with the increased presence of electric guitars in alternate tunings edging his sound towards the sonic territory of  bands such as The Clean and Sonic Youth. Recorded by Dale Cotton at the Masonic Lodge in Port Chalmers, Endearance included such standouts as acoustic heartbreaker ‘Please Elvis’, and the brooding electrified ‘The Jaws Of Life’. The latter was chosen by Graeme Downes to be showcased on Playing Favourites, a New Zealand National Radio show produced by award winning broadcaster Kim Hill. Downes clarified his choice by calling his former student “one of the best lyricists we’ve got in the country.” Reviewing the album for the Sunday Star Times, Grant Smithies compared “the almost forensic precision of the lyrics” to the meticulous craft of Bill Callahan and Joni Mitchell, whilst Gary Steel noted in Real Groove magazine that “there’s absolutely nothing that could be interpreted as a generic love lyric,” paying tribute to Comber’s ability to “evoke the stark reality of humdrum suburban lives.”

The E.P The Right To Talk To Strangers (2011), recorded back in Auckland with producer Thomas Healy (Tiny Ruins, Popstrangers), consolidated various elements of the previous efforts and added synth strings and e-bows to the mix, and a cover of the obscure kiwi classic, G-Frenzy’s ‘Tonight The Kids Sleep In The Car’. ‘Young and In Love’ was an unabashed jangle pop song with an infectious electric guitar hook, whilst ‘Twin Insomniacs’ began as an unaccompanied dirge before segueing into a droning, discordant psychedelic guitar workout. Writing for Elsewhere.co.nz, Graham Reid observed that Comber “seems to have a confident mainline into those places where few others venture: insecurity articulated in small details, astutely observed slice-of-life images which suggest more than they say.” Reid’s review promised that “As before, he is deserving of your serious attention. You will want more.” Following the release of the E.P came Comber’s first overseas tours, supporting 90’s indie rock California golden girl Barbara Manning through America, and accompanying his friends/mentors The Verlaines throughout Australia. 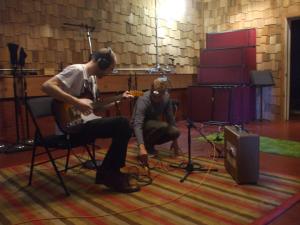 In 2013 Comber began performing under the moniker Herriot Row, a homage to a street in Dunedin where he’d spent many a night hour reflecting on songs in progress. By the following year he was finally venturing back to the United States, but this time to record. The debut Herriot Row L.P was made at San Francisco’s legendary analogue studio Tiny Telephone with John Vanderslice, a revered producer whose credits include The Mountain Goats, Spoon and Samantha Crain.

The new recordings see Comber continue to test the limits of what can be written about in a folk song. The lead single Learning Not to Talk, released as a 7″ vinyl on Record Store Day in 2016, captures a single moment in time, a minor epiphany in which the intimacy of shared silence dawns on the narrator. The Usual Business does a 180 degree turn about and beyond the city at twilight, peeking into the lives of preachers, prisoners, sailors, singers and more, in one of Comber’s most accomplished narratives to date. Beautiful and Harmless is an  infectious love song sung by a decidedly unreliable narrator. The Beggar follows the ghost of early 20th century New Zealand poet R.A.K Mason out to the edge of Auckland’s Queens Wharf where, as the story goes, Mason hurled many un-bought volumes of his debut collection into the sea. Vanderslice’s defiantly straight-to-tape production brings the new album closer to the warmth and fragility of Herriot Row’s compelling live shows. The Herriot Row L.P Lesser Stars is released In New Zealand on September 1, 2017.